Today I am going to talk about advanced debugging techniques in XCode. I am not going to spend much time on explaining the different options that you can find in the IDE, how to set breakpoints, or stuff like that. You can find basic techniques in many resources on the Internet.

But before starting, I want to remark two things:

So, having said that, let’s start!

1. Reproducing the bug and first inspection

First thing to do when debugging is being able to reproduce the bug and inspect the error. In this case, this is what I get when running my app. 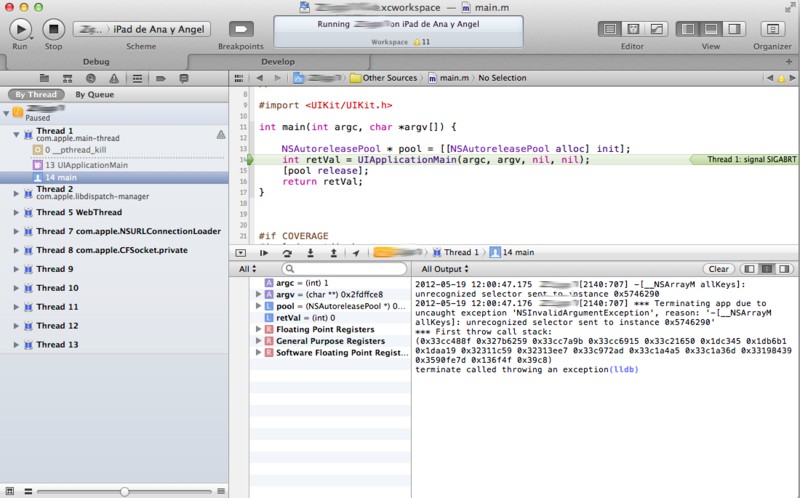 As you can see, there is not much information, but some ideas:

At this point, we need to dig inside the previous information if we want a hint about the bug. Let’s first take a look to the object which produced the error to see if we can guess where it comes from. Just type “po objectName/address” on the console:

No luck! an empty array!

And what about the backtrace? let’s take a look at it by typing “bt”

No luck either! The information dumped is the same that the one shown on the left sidebar. Nothing interesting rather than system calls!

By following the previous steps you usually get enough information to find the bug. However, in this case it is not enough. So, what’s next? Up to this point, we have to go deeper in our search. What we want to find is the line of code that produced the exception, and even if we don’t know it yet, it is right there, in front of our eyes. Take a look again to the error printed on the console (Screenshot 1):

What is all this? well, they may seem random numbers, but they are not. In fact, all of them are references to code lines in the binary, a trace of our execution stack.
The first group of numbers are references to the iOS frameworks, the second group of them to our source-code, the third one back again to the iOS, and so on.

So, ok, we have the line references. If we assume that the iOS frameworks have no bugs, the last executed line in our code is the 0x1dc345. It seems a good starting point to check out, but how?

Well, in GDB we had an amazing “info” command that gave us the source file and line number in our code, but  it is not longer available in LLVM. If we inspect the LLVM help, we can find another command that looks very similar to what we are looking for: “source info”.

Unfortunately, by running this command in the current version of XCode (4.3.2) we get this annoying message:

WTF!!! But wait, there is another command. It is called “disassemble” and might also help us! Let’s run it:

This is exactly what we wanted! Ignoring the dumped assembler code, we have a reference to a source line in our code! “FacebookActivityManager.m:210” 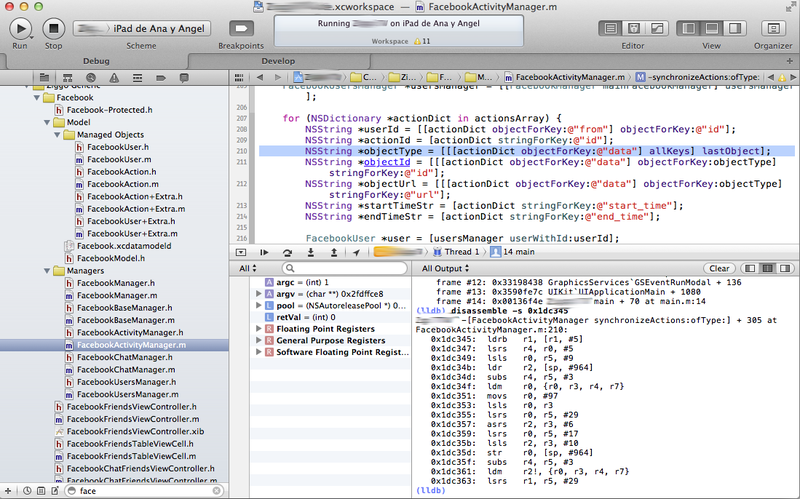 We check out the indicated line, and it actually makes an “allKeys” operation with something that comes from Facebook and has not been validated! this is clearly the problem!

OK, we have the problem detected, so we could actually just place an if-statement to check that the data object is a NSDictionary and protect it from crashing. That’s all, right? wrong!

There is still something strange about it. In this snippet of code we expect Facebook to reply always with an NSDictionary in our app, so we should try to see why sometimes gives a different data structure. It could be related to another bug in our code which sends incorrect data to Facebook.

Well, the first idea is setting a breakpoint in it and inspect the data. However, we have hundreds of “actions” in our example, and just a few of them (maybe one) fails. It could take forever to find it!

The second idea is putting the if-statement and place a breakpoint in it to check only the incorrect ones. Even if it is perfectly fine for this example, it requires modifying the code, which sometimes could mean changing how is produced. We should always try to change as little as possible when debugging, including NSLogs, variables, conditions,…

So, I am going to do it with a breakpoint, like the first idea, but with a special stop condition that will only be true when the data is incorrect. This approach will do the trick without modifying any code and will give as the possibility to change the conditions on runtime if needed. This is possible in XCode by editing the breakpoint as follows: 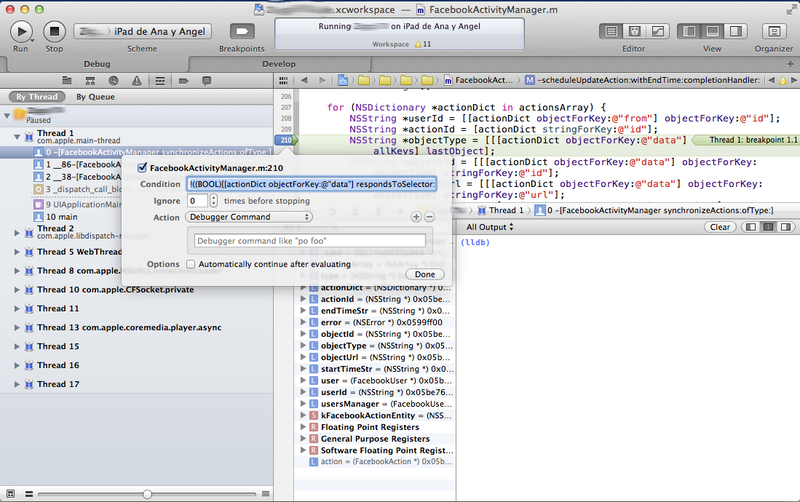 where the stop condition in our case is:

This will tell the debugger to stop only when the condition is true, and therefore when our data is invalid.

By the way, we are not going to use them in this example, but some of the breakpoint options are really worthy to take a look at. Especially, the combination between the “action” and the “automatically continue” checkbox can help us a lot when debugging complicated code. You should take a look to them if they are new for you (when you finish with this post of course hehehe).

We run it again and we get the following information from the actionDict:

Well, I am pretty sure that this will not say a lot to you with the information exposed in this post about the app, but in fact I can assure you that thanks to this trace (and a couple more) I actually found another bug within the Facebook integration, the one that caused the incorrect data to be sent. It is a different topic that involves server side, so I am not going to continue there, but I wanted to point out the importance of debugging the problems until you find the root cause, not just fixing it in your breaking line. If we had stopped when fixing the problem and not continued investigating why the empty data was there, I would not have found the real bug until later, when it would have been more difficult to solve without a doubt. Always continue until the real root cause!!